At NYCC 2013, Emertainment had the amazing opportunity to sit down with Rebekah Isaacs, the artist of Dark Horse‘s Angel and Faith.

Emertainment Monthly: How’s your convention been going so far?

Rebekah Isaacs: I’ve been sitting down for most of today, so that’s been lucky. I haven’t done a table here in a few years, so it’s all just wandering around, shaking hands with people, and seeing friends here that I only see here. It’s always exhausting and exciting to be here.

Were you a fan of the series when it was playing on television?

No. I was pretty young when it came out, about middle school, so I didn’t really get the whole high school thing or why it would be interesting. I didn’t start watching the show until just a little before I got the job. I had a friend who was a huge Buffy fan and he sat me down and forced me to watch Season One. Once I got the job, I kept pressing through, and once I hit Season Two I was just hooked.

Especially from someone who didn’t experience the show from the get-go, how has it been drawing these characters that are so iconic that people have a lot of opinions about, and they have real faces like Eliza Dushku and David Boreanaz?

It’s a lot of pressure, for sure. We get a lot of fan response, and—like you said—it’s very opinionated. But I love it. I love having this fanbase that truly still cares about these characters. Working in superhero comics before, you get a feeling that a lot of people are starting to get jaded, and for good reason. Everything’s been rehashed and every character has been killed and brought back to life. With these stories, it really matters if somebody dies or if something bad happens to someone.

They really want the best for these characters, they really care about them still; they’re like real people. Everyone’s still been really supportive, even when the criticism is negative. It’s done in a loving way, like they want to see these characters presented well and they want us to do well in telling these stories. 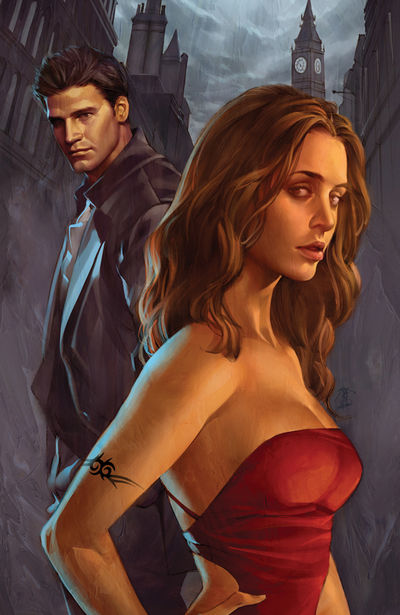 What did you work on before migrating to the Buffyverse and how did this transition into doing Angel and Faith come about?

I did a few fill-in issues for Marvel. The first mainstream book that I ever got was a Ms. Marvel fill-in issue. Then I did a Captain America Falcon issue, and a couple Iron Man. In between that, I did Dv8 with Brian Wood, which was superhero with more of an indie angle.

I got an e-mail about doing Angel and Faith from Sierra Hahn, who knew Brian Wood from her time at DC. So, it was a lot of people knowing people, and networking, and word of mouth. So, I got that email, but I still had to audition for it. I still had to prove that I had to do these likenesses, though at the time I couldn’t do them very well.

How is working with  Christos Gage [the writer] compare to other writers, and what’s your process at turning script into art?

I’m really lucky to have worked with really incredible writers that are fantastic to work with. Chris in particular lets the script breathe for his artist. His main focus is on the emotional weight of the scene and his dialogue is so fantastic. Really, the only cues that he give me are what the characters are feeling, and the rest is left for me to visually interpret. I love that freedom. It’s not that I’ve worked with a writer that doesn’t do that, it’s just we work together so well.

A lot of people consider the comic book world to be a “boy’s club.” How have you navigated that and what do you think about it?

I can see why people have that conception, but I think it’s very superficial once you get past that initial feeling that you get at conventions where you mostly see men—men working behind the booths and seeing a rack of comic books with mostly male names. It’s kind of a non-issue, I think. I’ve never really felt like there was an obstacle to overcome in that respect. It probably helped me with that respect, since—when you’re in line to get your portfolio checked out—you’re going to stand out. Naturally, people are more curious about your work and they’re going to pay more attention to your work. If anything, I think it’s an advantage being a female trying to break into the industry. Once I started to get work, I stopped thinking about; I just start to think of myself as just another person working in comics. It’s not even an issue anymore.

Oh, this is really tough. I think character-wise, I think Faith is probably the most interesting of the series because she’s changed the most, between the show and the comics. And she’s still struggling with a lot of her demons, but she’s grown up and matured so much.

Visually, I love little Giles—spoilers! If you haven’t read the series you should probably stop! I love drawing younger kids, younger teens, because they’re so animated and so rubbery and expressive.

What are your plans for the future?

Well, I’m signed on to Buffy for two and a half years, and then beyond that it’s too far in the future to really think! I love working in this universe, so I have no plans to leave it until they kick me out! It doesn’t leave me time to work on anything else, and I like to relax in my spare time. Buffy is my world, and I wouldn’t want to have it either way.

How did your artistic style?

I actually tried very consciously to not focus on developing a style in school. I saw so many people trying to imitate other artists, and I never felt like my art looked unique. Over time, it organically became my own voice. People began to tell me they recognized my work without looking at the credits. It’s tough, and takes years and years to develop your own style, but you really just have to not think about it and not be conscious of it, or else you’re going to end up looking like a clone of someone else.

Could you give any tips to anyone who wants to break into the industry as an artist?

Draw every day! Draw as much as you think you can, and then draw another hour on top of that! Until you actually start getting full-time work, it’s so impossible to tell how many hours you’re going to work it. It’s so important to build up that endurance and draw constantly. Turn off everything else! Once you get your first job, it’s going to be your entire life, drawing fourteen to fifteen hours a day. It’ll get easier once you get used to that kind of workload, but you really have to train yourself.