Alysha Boynton ‘17 / Emertainment Monthly Staff
At the end of last week’s exhilarating mid-season premiere of Teen Wolf, the residents of Beacon Hills were left dealing with a wide range of problems, everything from the supernatural to the psychological. After sacrificing themselves at the end of season 3A and temporarily dying, Scott (Tyler Posey), Stiles (Dylan O’Brien), and Allison (Crystal Reed) are now coping with the mental after-effects of what they did to save their parents.

The horror movie-esque style of the second half of the season was firmly established in the previous episode “Anchors”, and in this week’s episode, “More Bad Than Good,” we continue to see just how deeply the trio is suffering. Stiles is living in a constant nightmare, never fully sure of what’s real and what’s just a dream. Scott is afraid to transform into his new alpha form, thinking he might not be able to control the shift. And Allison, formerly the best archer in all of Beacon Hills, is too tormented by visions of her dead aunt to hold a bow steady.
In this episode we rejoin Derek (Tyler Hoechlin) who was last seen briefly at the end of the premiere, chained up to a wall alongside his sleazy uncle Peter (Ian Bohen). They’ve clearly been enduring round after round of torture at the hands of some new unnamed villains, the leader of which is a Spanish-speaking grandmotherly woman who manages to be extremely menacing. She demands that they tell her the location of the “she-wolf,” and when they won’t talk, she proceeds to chop off one of Peter’s fingers and stick it claw-first into a nearby table in a gruesome display.
Then it’s back to the misadventure of Scott and Stiles, who are still running around in the middle of the woods trying to glean some information about one of the Sheriff’s (Linden Ashby) old cold cases which they think might actually be related to the supernatural. The boys are convinced that a coyote they’ve been seeing around their school is actually a girl who went missing over 8 years ago. This confusing and slightly aimless plotline takes up most of the episode, unfortunately, and the rest of the gang eventually gets involved in the search for Malia, whose slightly more-violent-than-necessary father is convinced that the coyote killed his daughter, and is out for some revenge. 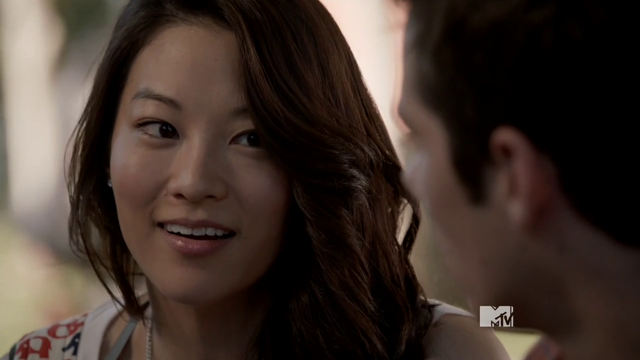 The interim scenes of the episode feature some adorable and secondhand embarrassment filled moments with new girl Kira (Arden Cho) and Scott, as well as a touching yet heart pounding scene where Scott talks Stiles down from a panic attack. There’s also a brief scene where our heroes meet up with the fallen from grace Alpha twins, Ethan and Aiden (Max Carver and  Charlie Carver) in Derek’s abandoned loft, where they attempt to somehow beat Scott up until he can control his Alpha powers (this scene makes no sense, and we’re also left wondering how and why Stiles has a key to Derek’s place).
Lastly, in one of the most significant scenes of the episode, we witness Derek and Peter’s rescue from wherever it was they were being held captive, and their rescuer is none other than the mysterious Braeden (Meagan Tandy), the girl who rescued Isaac in the season three premiere and then seemingly died. But nope! She’s still alive, and for some reason her boss is paying her to bring Derek and Peter back to Beacon Hills, along with some unknown cylindrical object with a triskelion engraved on it, which they have to retrieve from a box filled with mountain ash before fleeing the premises.

When the episode finally gets back to the Malia storyline, it focuses mainly on Scott, Stiles, Allison, Lydia, and Isaac (Daniel Sharman) trying to navigate the woods (which have been booby-trapped to the nines by Malia’s father with large bear traps) and find her before she gets hurt. There’s a distinctly out of character scene where Lydia steps on a trap and Stiles has to disarm it, which would be fine if it weren’t for the way the show is seemingly turning Lydia into a damsel in distress instead of the super-genius independent woman she is. When she falls helplessly into Stiles’s arms after he disables the trap, we’re meant to swoon with how much we want them to kiss, but their dynamic is so wrong for a romantic relationship the scene comes across as forced and awkward.
Scott eventually catches up to the were-coyote, and uses his powerful alpha roar to get her to submit, and subsequently turn back into a human girl for the first time in eight years. They return her to her father, and everything seems momentarily right in the world. We just have to cross our fingers that the writers won’t take the easy, obvious road of making Malia a love interest and instead focus on her getting her life back together, but taking into account most of the decisions they’re been making lately to appeal to a younger, more traditional MTV audience, it doesn’t look so good.