Serena Hope Hohenstein ’17 / Emertainment Monthly Staff Writer
When Mamma Mia the movie came out, audiences saw it in theatres and absolutely adored it. Several years later, they got to see it on the stage. The Broadway stage. While sitting in the 20th row at the Winter Garden theatre, it’s hard to ignore the similarities and differences to the film and the play. Decide for yourself where the musical best belongs: the stage or the screen.

One of the most iconic things about Mamma Mia is, of course the music, but several of the songs in the stage production are cut from the movie. “The Name of the Game,” “Under Attack,” “One of Us,” and “Knowing Me, Knowing You” are absent on the screen. This isn’t necessarily a bad thing. These songs are fun to hear on the stage and give some of the cast members a few more songs, but they don’t feel essential to the plot. All the songs in the movie are ones that push the plot forward and give the audience the information it needs to know regarding the characters and their relationships with each other. That’s not to say that the extra songs in the stage production feel like overkill, however. The cut songs are fun ABBA tunes (are there any other kind?) that are a blast to hear in a musical, but aren’t vital to the screen. 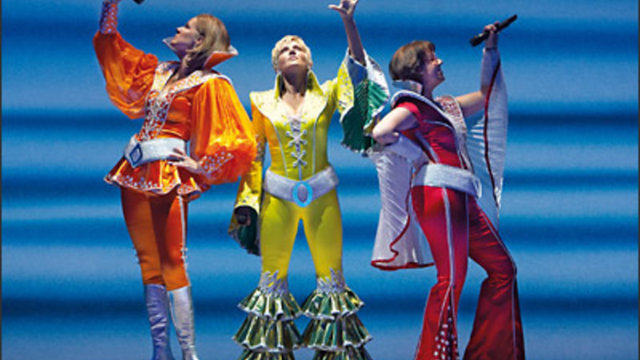 With a limited amount of stage and backstage space, a Greek island and all its locations have to become quite miniscule and simple on the Broadway stage. Because of this, the lights are what make the show more realistic (Much like “In the Heights”). The main set piece for the stage show is a cylindrical block with three sides. To change the scene the cast and crew simply rotate the block to the correct location and add or retract a few flowers, decorations, tables and chairs, etc to get the right look. Because the whole show takes place over a course of two days, the lights change based on the time of day. There are also times when the lights change based on the type of song – But it’s a Broadway show, what else would you expect?! Even though it’s fun, using the lights this way to highlight the comedy or feel of the situation, along with the minimal set, can bring the audience out of the world of the show – It’s hard to feel like you’re actually in the story. The movie, however, was actually filmed in Greece. It’s a little easier to believe the location when it is the location…And the lighting was only the lighting that would have been happening during the specific time of day. That way, everything feels very real. Most of the cast of the Mamma Mia movie are Hollywood stars, not Broadway performers. They got a lot of hate about their singing abilities when the movie came out, and do even still today. Sure, the actors portraying the three dads, (Colin Firth, Pierce Brosnan, and Stellan Skarsgard) don’t have much of a musical background, but would anyone expect these three characters to have the most incredible voices? Even on Broadway, the actors had more breathy gravely voices. Strong nonetheless, but not your stereotypical Broadway man’s voice.

At times, the females in the movie performances are more impressive than the stage performances. In the productions of Broadway’s : Mamma Mia” that I saw, there were moments that felt like the women were just going through the motions. Yes, they’re wonderful actresses, but really, how can you beat Meryl Streep in acting? How? Her performance in Mamma Mia is breathtaking. Just watch a clip of “Slipping Through My Fingers” or “The Winner Takes it All” and you’ll understand. While a Broadway show is variable and some days are off and some days are on, you can always count on Meryl Streep to deliver when you pop in a DVD. In my shows, The Sophies were equally as good. As much as I could tell, anyway. It’s more difficult to judge a performance when you can’t follow their every move and facial expression — Which brings me to my last point…

Sitting in a Broadway theatre (specifically the Winter Garden) watching a stage musical and being in a movie theatre watching a movie-musical are drastically different experiences. The audience gets pretty much the same songs, script, and sometimes choreography, but what’s different is the angles and the atmosphere. In a Broadway theatre, the audience member is stuck in one spot, with that one angle, seeing the entire stage for the entire show. In a movie theatre, the audience member still cannot move, but instead, the camera moves for them. The creative team gets to decide what they want the audience to see. On the stage, the creative team can attempt to do that, but at the end of the day, their audience can look wherever the heck they please! Because of this, audience members may miss a moment essential to the plot. On the screen, there’s almost no way that can happen. Another downfall to this particular show in the Winter Garden theatre is that there’s a lot going on at all times on stage. And there’s a lot of room on the Winter Garden stage! It’s extremely wide, making it difficult for the actors to play to the entire audience (something that can be easily done in smaller houses). It was much more difficult to understand the characters’ emotions besides what I could hear from their voices.
The one thing that is indisputably the same and equally as wonderful for both the stage and screen are the encore songs! At the end of the movie Donna and the Dynamos along with Harry, Bill, Sam, Sophie, and Sky sing “Dancing Queen” and “Waterloo”. The same goes for the stage production. After the bows, the band strikes back up and the cast performs the same two songs, often with a reprise of “Mamma Mia” as well. They tell the audience to get up out of their seats and sing and dance along and it is one of the most joyous experiences you will ever have! The same goes for the movie. No matter which version you think is better, there is no way you’ll leave the theatre, be it big screen, small screen, or stage, feeling down. Absolutely no way.