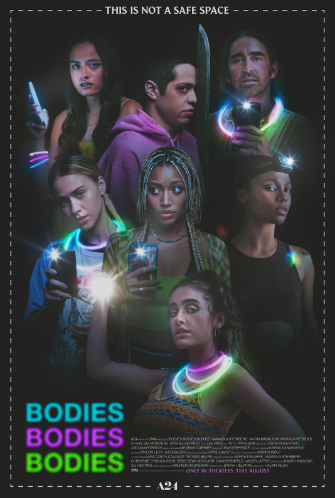 The horror genre is experiencing a sort of renaissance lately, and many fans can agree that the films that have come out in the last few months have really been creative, innovative, and amazing entries, and will go down in history as some of the greatest horror of our time. Bodies, Bodies, Bodies is no exception, blending horror and comedy for an unforgettable viewing that will have you in stitches in between screams.

We begin by meeting Sophie (Amandla Stenberg) and Bee (Maria Bakalova), who are on their way to a hurricane party hosted by Sophie’s childhood best friend David (Pete Davidson). In attendance are their friends Emma, (David’s girlfriend and aspiring actress, played by Chase Sui Wonders), Jordan (resident mean girl, played by Myha’la Herrold), Alice (party girl and podcast host, played by Rachel Sennott), and her boyfriend Greg (an older “vet” whom she met online, played by Lee Pace). While playing the hide-and-seek game Bodies, Bodies, Bodies, their night begins to go awry when one of the friends turns up dead. Slowly but surely, the remaining party guests begin to place blame on one another, but who could be the actual killer?

The film really takes the audience along for the ride, masterfully creating a whodunit mystery thriller that’s bound to have even the most seasoned of horror fans stumped. The film’s twist is extremely satisfying, and if anyone told you they ‘saw it coming,’ they’re lying. It seemingly comes out of left field while still making perfect sense for the film, really driving home its tone as a whole.

Speaking of tone, it is something that this film does exceptionally well. Bodies Bodies Bodies is a horror comedy, a subgenre under the larger horror umbrella that is extremely difficult to do right. However, the film seamlessly blends outlandish and satirical moments and jokes with suspenseful sequences.

The humor in the film is very Gen-Z focused, and a lot of the comedy makes fun of the “woke culture” of young people, as well as how that clashes with the characters’ upper class status and generally selfish motives. Generally, this can be a bit disconcerting to younger generations, as these types of jokes can often be presented in a very condescending and tone-deaf manner that really fails to capture the essence of Gen-Z at all.

However, Bodies Bodies Bodies very much gives the energy of laughing with you rather than laughing at you, and the humorous take on upper class young adults is of course dramaticized, but is steeped in so much truth. As a young person, it’s almost as easy to laugh along with the characters as it is to relate to some of what they say, and some of their experiences.

All that being said, if you’re someone who’s a little older, a lot of the jokes in this movie might not land quite as well as they do for some of the younger people out there, but the film still proves to be entertaining regardless, and a lot of that is thanks to the extremely talented cast.

Rachel Sennott is really a stand-out here, playing party girl Alice. She is absolutely hilarious, and steals almost every scene she’s in. Other notable characters include our two leading ladies, Amandla Stenberg, (Sophie), and Maria Bakalova, (Bee), who play off of each other effortlessly and really help to ground the film as a whole.

The film truly is a great example of how to successfully bring horror into the modern age, and it balances tried and true horror tricks and tropes with an inventive spin that truly cements it as one of the best horror films of this year.

Summer may be over, but Bodies, Bodies, Bodies will surely never go out of style. Go see it in select theaters near you, and bring the party home when it comes out on blu-ray October 11th.